I have been working with children for many years now and if you asked me what issues I see them  the most for, my answer would be ADHD (Attention Deficit/Hyperactivity Disorder) and related behavioral problems. The typical age that a child is diagnosed with ADHD is somewhere between five to eight, which means, at the time the behaviors interfere with the child’s learning at school. Although there is a lot of information out there about ADHD, some misconceptions still persist. In this post, I will try to clarify some of them.

To my observation, a big dilemma for parents with children with ADHD is whether they should “medicate” their kids. This is certainly not an easy call. Some parents first try to manage the situation by structuring their home life, which is quite helpful. In school, they cooperate with teachers to help them find the best behavior management system for their  offspring. However, in severe cases, medication is necessary along with all these strategies mentioned above.  If you closely work with the prescribing physician (your PCP, pediatrician or a child psychiatrist) to find the right type of medication and the dosage, your child will be able to be successful in school, to have a better sense of self and to develop better social skills. However, remember,  it is not the medication per se, but the effect of medication on the child’s brain to use his/her executive functions combined with a series of “skill-building” in therapy  that makes the difference. A child with ADHD using medication is more able to listen, take in, observe, make connections & inferences and conclude. Therefore, such a diagnosis is not the end, but rather the beginning of a course of action that you need to consider to take to help your child blossom to be who she/he could be.

Neuroscience sounds like a big word. However, simply put, it is the science of the brain, or more specifically, of the nervous system. Of course, we can not ignore the complexity of this vital organ. The brain consists of many parts and systems, which orchestrate the whole body and mind.  Although the term “neuroscience” was coined in 1960s, the research on brain, nervous system and behavior goes back to antiquity.

So, what did we learn from the modern neuroscience that is relevant to the title of this post?

To me, the most striking information is the neuroplasticity of the brain, which means the brain is not a physiologically static organ. It has the capacity to change throughout life based on experience. What that means is environmental changes could alter behavior and cognition by modifying the connections between existing neurons and also through neurogenesis (birth of new neurons).

Exposure to trauma/traumatic events affects brain functions. Which part of the brain is affected the most depends on the developmental stage of the individual at the time of traumatic experience. If a person was socially-emotionally traumatized during the first year of life when the development of the brainstem is in full-swing, we might see problems in metabolism, hyperarousal or sensory perceptual problems rather than cortex or limbic based issues of guilt, identity, personal awareness, coping skills, etc. Although regions of brain that are immature and developing slowly are less likely to be severely affected by an early trauma, the affected lower brain structures often lead to inhibition of higher level brain function. Therefore the earlier, the worst.

The good news is that the damage of social-emotional trauma on brain is reversible thanks to neuroplasticity. This is of paramount importance for mental health professionals. The intervention strategies must be carefully tailored according to the brain region affected and the developmental level of the child at the time of trauma.

Brain regions respond to specific types of sensory input. Cognitive and insight-oriented interventions will have limited effect for a person traumatized very early in life. Non-verbal modalities such as sand play, art, movement therapies could provide alternatives to access low brain regions in order to modify connections in existing neurons.

At the end, psychotherapy of all kinds is a process of “corrective experience”. All we need to do is to access the specific brain region through specific types of sensory input. Sometimes it is “words”, some other times it is “kneaded, squeezed or cut-into-pieces of clay” that is worked in the presence of a quiet witness. As the neuroscientist Bruce Perry suggests, the bottom line is to use the neuro-developmentally appropriate therapeutic activities for the specific brain region affected.

I consider myself an avid reader. This is both because I simply LOVE reading and also because of the field I work in; psychology/psychotherapy is one of the disciplines with very vast literature choices, which sometimes feels like falling into an endless well. If you read one book, that makes you curious about five others and your to-read list increases exponentially.

Since I work with children and their parents, a good parenting book that offers parents practical tools on how to deal with daily parenting issues is like a treasure to me. Here is a little bit about How to Hug a Porcupine by Julie A. Ross.

What struck me first about this book is the title. I haven’t come across any better description for the tween years. Please notice the humorously illustrated child on the cover. I personally found it quite funny and “telling”. 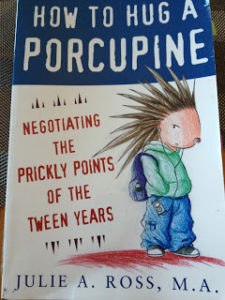 What Julie A. Ross tells parents in a very reassuring and empowering way is:

This short review doesn’t do the book justice. If you read the book, you will find tons of practical techniques and advice as well as anecdotes from real parents and as a result you won’t feel “defeated” and “alone” with your struggles anymore. Whether you deal with defiant behaviors, the computer “addiction”, sibling rivalry or the push for independence, you will find valuable information and tools to handle your “porcupine”.